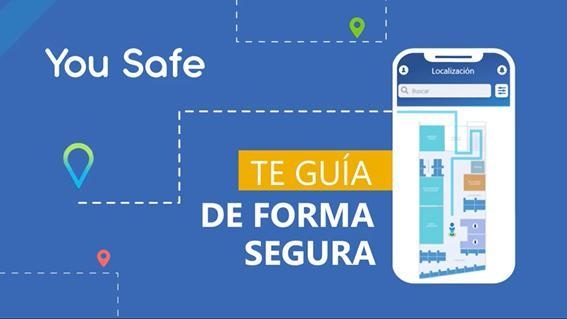 You Safe: The App for Emergency Evacuations developed by DB System with Situm’s indoor location technology

Situm’s geopositioning system has been elected as a technological base for the development of You Safe, DB System’s mobile app. In this case, our indoor location technology turns into the heart of an app designed for users to receive on their mobile phones all the information they need to evacuate a building in case of an emergency drill or an actual emergency.

If you’re in a large and unknown indoor space like a shopping mall and a natural disaster or emergency situation ensues, the first thing you’d do is find the fastest and most effective way to get out of there, no doubt. But do you think this would be an easy task? Would you look for security personnel to get indications on where to go? Would you try to guide yourself by following traditional signs or site plans? How long would it take you? A Colombian tech company, DB System has worked hard on this issue and has released its mobile app You Safe to the market. This app allows every user to have all information on their smartphone (maps, alerts) so that they can be more autonomous during dangerous situations.

For this development, DB System has integrated Situm’s indoor positioning technology. Our system works like an indoor GPS and allows users to locate themselves in an unknown space (shopping malls, hospitals, airports) and move more independently. It barely uses dedicated infrastructure to be implemented because Situm takes advantage of pre-installed signals in the building (WiFi and Bluetooth) which allows for very fast deployment. This way, once deployed, the real-time positioning system provides high precision and automatic floor detection to guarantee full space coverage.

All these features are vital for the development of You Safe because their application is designed to provide its users with all the necessary information to be able to get out of a large building in the event of a contingency. This improves the evacuation of a large number of people in the shortest possible time during dangerous situations. This proves to be a very useful tool in the face of an event such as an earthquake, a type of natural disaster quite common in Colombia, a country which has endured a
long list of seisms.

Emergency information in the palm of each visitor’s hand…

It seems obvious that when it is necessary to empty a large building or interior space in an orderly, efficient and fast way, having a tool like You Safe can be quite advantageous for the users:

You Safe is a user-oriented application but it has a very positive impact on the management of catastrophic events by security officers:

If you’re interested in getting more information about Situm’s indoor guiding technology or about DB System’s You Safe, don’t hesitate to contact us.

In order to be able to offer the services of the website: www.situm.es and to be able to administer it, Situm Technologies, S.L. and, where appropriate, other companies related to the provision of the services contained on the mentioned website, we will store certain information on your computer using cookies. If you continue to browse, we will consider that you accept their use. You can configure your browser, reject the use of cookies or/and obtain more information by consulting our cookie police.